Breaking the pacifier habit was one of the hardest things I’ve ever done as a mom! Seems, dramatic, but it was pure misery. I’m sure as Bailey gets older there will be things that are even harder, but this was pretty dang hard.

Bailey was the kind of kid that used the pacifier for comfort, and nothing else. No blanket, stuffed animal, or lovey. It was the pacifier (and the bottle..that’s another post!) Bailey used the pacifier until she was 3 years old. It was actually the month after she turned 3 that we took it away and didn’t look back. We went on a family vacation and she relied on it the ENTIRE time. There were other kids around and it was quite embarrassing that my child had to have a pacifier in, or throw a fit. Granted, it was a new place, so she was a little scared, and again, used the pacifier for comfort. It’s like Julien’s sunglasses from Big Daddy. The pacifier made her feel safe. I hate that I had to take it away, but after that trip I knew it was now or never.

We got home and without any real “plan” I cut the pacifier and told Bailey we were mailing it the “Ninny Fairy.” The “ninny” is the pacifier, obviously. I called it a “ninny” as a kid, so we kept it. We walked down to the mailboxes and dropped it in. I made a HUGE deal about it (knowing we’d have a fit later). Her brother also had the same type of pacifiers, so I had to make sure she wasn’t stealing his.

Onto bedtime, the time I was DREADING. She was crying and screaming with her hands in her mouth. She needed it to soothe herself in order to fall asleep. I gave in the first night and said “Harper said you could use his tonight, but the ninny fairy has yours.” She went to sleep.

The next night (because the day was pretty easy if I kept her busy) the same fit happened. I wasn’t giving her the ninny back. I found a teething toy that was a silicone material similar to a pacifier. I let her chew it and she chewed it for a few minutes and then fell asleep. HALLELUJAH! This is the exact teething ring I used. 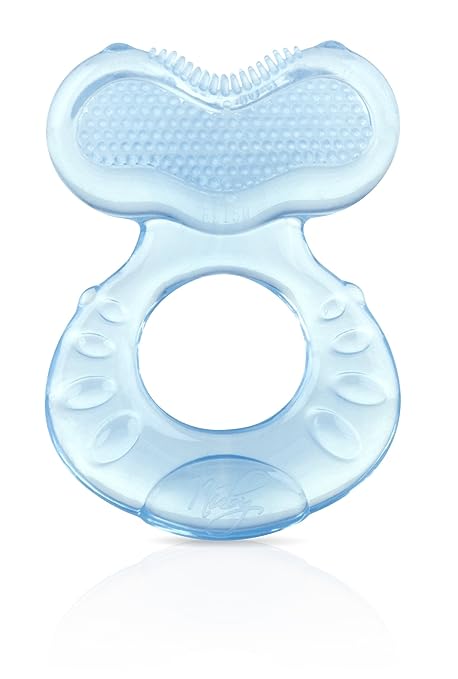 I had found a loophole. I used this for a few nights until she stopped asking for it. The pacifier was DONE! If I had to give a piece of advice to a mom or dad that was trying to break the pacifier habit, it would be to try and make it a positive experience and wait until they are ready. The dentist told me I had to get rid of it by the time she was 3. I was a little late, but we did it! And Bailey still talks about the “Ninny Fairy” on a regular basis. I am glad this chapter is over. Next on the list is getting her to sleep in her bed. Drop some suggestions for that one below! 🙂

Some other ideas I thought of in case the “fairy” didn’t work:

-cut it and throw it away

-send it to other children who need it

-give it to Santa

My name is Kayla Nelson and I am a former teacher, now work at home mom to my two beautiful children, Bailey and Harper. I am a wife to Russell Nelson, a busy chef in our Southern Maryland hometown. I love learning ways to be a better mom and am excited to be sharing my experiences of motherhood with you. View all posts by Kayla Rae Nelson